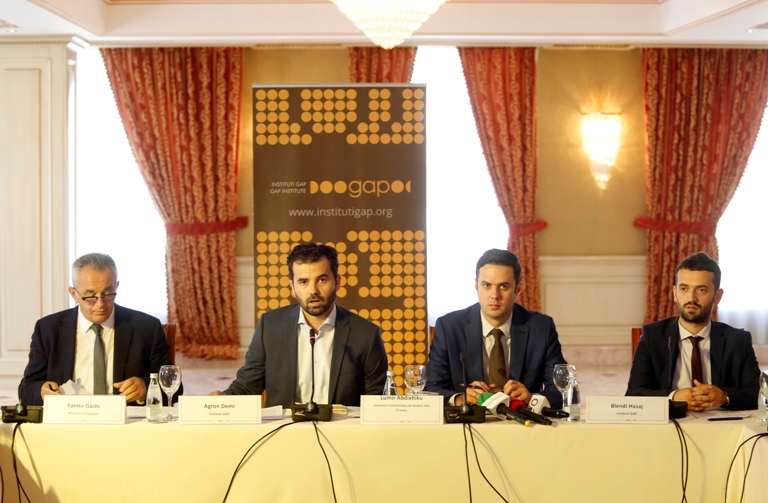 GAP Institute held a round table discussion today titled “Budgetary Impact of the Law on the Meritorious Pension of Albanian Education Workers of the 90s".

Agron Demi, Director of Programs at the GAP Institute, stated that this draft law shall guarantee pension to all education workers of the 1990s, even to those with only one year contribution to the education system. Education workers who contributed 1-5 years to education in the 1990s will receive 65% of the basic salary, while those who contributed 5 to 10 years will receive a pension of 75% of the basic salary in education. About 23,000 people will benefit from this law, and in the event of their death as receiver of pension benefits, pension benefits will be transferred to their spouses. According to him, the cost of this law is underestimated, and even the Ministry of Finance has not approved budget for 2018 concerning this initiative. He also noted that about 200 million German Marks were collected in the years 1992-1998, 91% of which were spent on education.

Blendi Hasaj, a researcher at the GAP Institute, noted that the calculations of the Ministry of Finance did not take into account several factors with impact on the increase of the budget costs for this law. According to a scenario calculated by the GAP Institute, the costs of the law for the period 2019-2020 is expected to be around 30.4 million EUR or 16.1 million EUR (114%) higher than the calculations made by the Ministry of Finance for the same period. According to him, it was assumed that all beneficiaries of this law will have a pension of 240 EUR and costs for additional benefits from this law were not calculated. Given a continued increase in social schemes by categories and the approval of separate laws for these different categories, Government of Kosovo should review all the social schemes, especially pensions by category, thereby adopting a new basic law on state-funded pensions, which would include all these categories.

Deputy Minister of Finance, Mr. Fatmir Gashi stated that GAP Institute is right that costs of this draft law have been underestimated. According to a scenario calculated by the Ministry of Finance, the costs of this draft law will be around 230 million by 2031. Mr. Gashi also said that this law shall endanger the financial stability of the country and will also encourage other categories to seek benefits from the state budget.

Lumir Abdixhiku, Chairman of the Parliamentary Committee on Budget and Finance, stated that the Ministry of Education, Science and Technology and the Ministry of Finance have put forward to the Assembly of Kosovo different calculations. Mr. Abdixhiku said that the Assembly of Kosovo should not adopt this law without knowing the exact costs of it. He promised to forward the recommendations of the GAP Institute to the Budget and Finance Committee.

Other members of the Assembly of Kosovo, representatives of education trade unions, and other education experts participated in the roundtable.