Problems without solutions - How do municipal government programs match the issues of concern for the citizens? 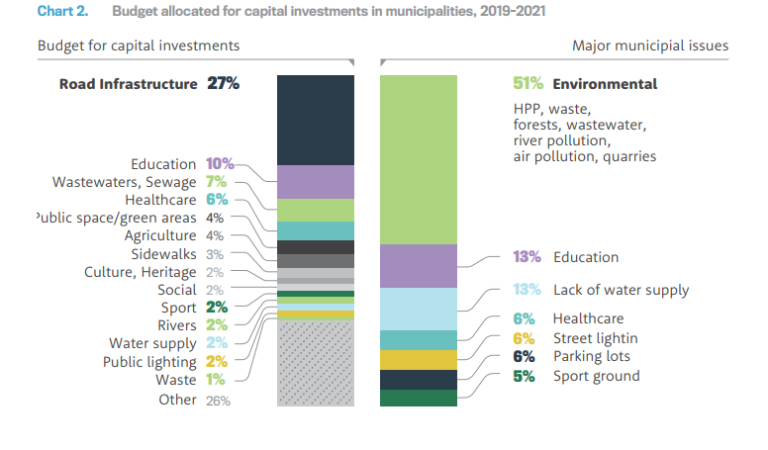 In order to steer the electoral promises towards the main concerns of citizens, prior to the 2017 local election campaign, GAP Institute identified the main problems in 30 Kosovo municipalities.

Now, nearly two years since the identification of problems in municipalities, GAP Institute reports on the nature of problems that concern citizens the most, how they were addressed by both the election programs and governing programs of current mayors, and the match between capital projects 2019-2021 and identified problems.

The problems reflected by GAP Institute are limited to only the issues the solution of which is in the powers of municipalities or in coordination with the central level. The largest number of identified problems (51%) fall into the environmental category, such as: waste management, sewage smell, river pollution, environmental problems caused by hydro power plants and quarries, logging of forests, etc.

Unfortunately, according to the findings of the GAP Institute, only a small part of the problems identified prior to the election campaign were included in the election programs of the current mayors. As a result, an even smaller number of problems was resolved, one and a half years since the beginning of the governing mandate.

Although environmental problems are the biggest concern of all citizens, municipalities have chosen to focus most of their budget in resolving road infrastructure issues, thus leading to a mismatch between municipal policies and citizens’ concerns.