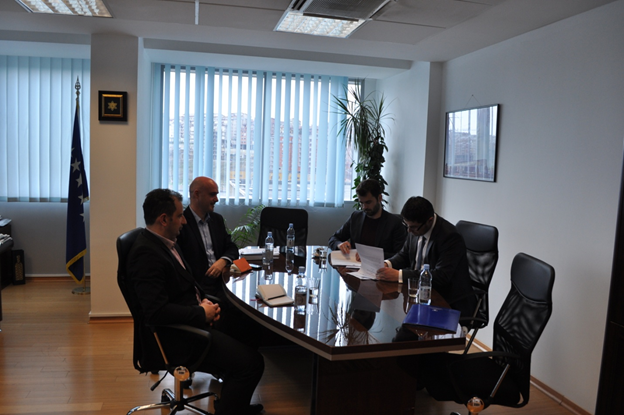 Public Administration is one of the main problems that need to be addressed along Kosovo’s path towards European Integration. Kosovo has lately signed the Stabilization and Association Agreement (SAA) which addresses the need for reform of the public administration. Among other aspects, Kosovo is characterized by a large number of institutions of public administration and big number of employees thereof. Besides the Government ministries and executive agencies, the Assembly of Kosovo has so far established by separate laws more than 30 independent agencies which have different organizations, systems of wages and employment relationships among one another and also compared to the Government ministries.


Ministry of Public Administration (MPA) as the responsible ministry for public administration signed yesterday a Memorandum of Understanding with GAP Institute in helping the efforts to reform the public administration in Kosovo.  With the support of the Swedish Embassy in Kosovo, GAP Institute will conduct research about the organization of the independent agencies focused on the employment relationships, system of wages, internal organization and accountability of these agencies to the Assembly of Kosovo. This research is aimed to help the MPA to draft the Law on the Organization of Public Administration planned for November 2016.


Government of Kosovo and MPA as responsible for public administration in Kosovo is committed to Public Administration Reform (PAR) and has put forward in the agenda a number of activities for this year. According to the Government legislative program for 2016, MPA is dealing this year with a number of laws which in terms of legislative framework for PAR are a major step forward. The Law on the State Administration which deals with the executive branch will be expanded to the whole public administration by covering also independent institutions and agencies which are established and report to the Assembly. Supplementing the Law on the State Administration to a Law on the Organization of Public Administration as a task of MPA also derives from the National Program to Implement the Stabilization and Association Agreement (SAA).


Public Administration Reform (PAR) is a strategic objective of the Government for years now and has been addressed by the European Commission Progress Reports on Kosovo for years now. Last year, the Government also approved a Strategy for the Modernization of the Public Administration and its Action Plan 2015-2020 built around three pillars of tasks and responsibilities. According to this strategy and action plan, the first pillar is about policy development and coordination under the responsibility of the Office of the Prime Minister, the second task is about civil service, human resources management, public services and re-organization and accountability in the public administration as a responsibility of MPA, and the third task on the management of public finances has been put under the responsibility of the Ministry of Finance.