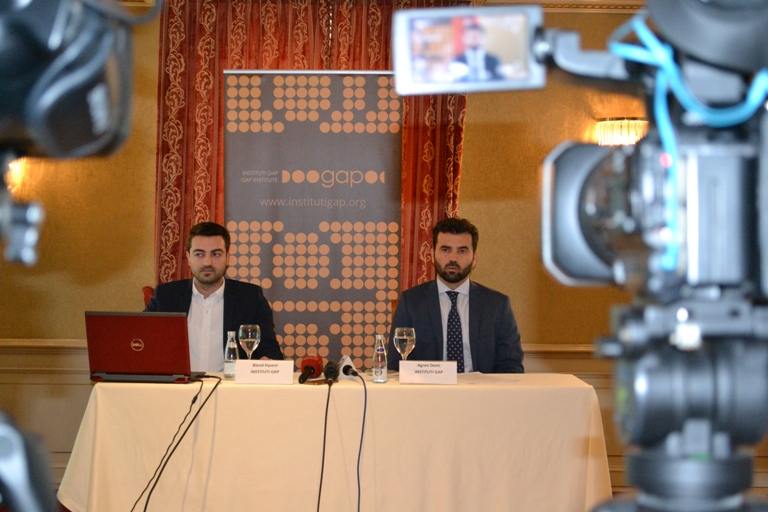 GAP Institute held a press conference where it presented a part of the analysis titled “Impact of Kosova e Re power plant on electricity tariffs”.

Agron Demi, a policy analyst at the GAP Institute, stated that the initial proposal for the construction of the “Kosovo C” power plant was presented back in 2005, when under the Kosovo Energy Strategy (2005-2015), Kosovo Government had planned construction of a power plant with a capacity of 2,100 MW at a cost of 3.5 billion EUR. With changes in governance by the end of 2008, the project for the new power plant changed its name as well, now being called "Kosova e Re" [New Kosovo], as well as its energy capacity. Initially, it was proposed that the new power plant should have a capacity of 1000 MW, to change later at 600 MW. In March 2012, Government of Kosovo submitted to the four pre-qualified companies the final call for bidding. Of the four pre-qualified companies, on November 23rd, 2015, Contour Global - was announced the only bidder. Despite the fact that the call for bidding was submitted based on the Law on Public Procurement, which for a tendering process to be successful it has to have at least two bids, the Government did not cancel the process despite receiving one bid only. Initially, the Government argued that the process was announced and managed based on the World Bank rules, later on this reasoning was changed by saying that it is a public-private partnership project. As of 2018, the procurement phase will begin on the selection of the construction company for the “Kosova e Re" power plant, so that the financial part and the date of transfer of the site should be finalized during 2019. Construction of the power plant will begin in 2019, and it is to be completed and to have production started in 2023.

He also said that construction of ‘Kosova e Re’ power plant is a project with an overall impact on the economy, state budget, health, environment, displacement of population, public debt and other related impacts. The GAP Institute in this brief report, however, has only analyzed the impact that construction of a new power plant will have on energy tariffs, according to the signed agreement.

Blend Hyseni, a researcher at the GAP Institute, stated that in order to present the impact of the cost of the "Kosova e Re" power plant in wholesale electricity prices as well as on tariffs of end customers, this analysis takes into account the data published in the Contract, and the electricity market data from the Energy Regulatory Office (ERO). Since the contracts financial report has not yet been finalized, the exact calculation of the electricity price upon commencement of operation of "Kosova e Re" power plant is difficult. However, given some parameters provided in the contract, possible changes in the financial report will not have a significant impact on the electricity price. According to him, upon construction of "Kosova e Re" power plant the price paid by end customers will result in a cumulative increase of 44 percent compared to the current price. While the average wholesale price will increase to around 61.4 € / MWh or about 86% cumulative increase compared to the current price.

A presentation model of the increase in electricity prices for the years 2018-2026 is highly conservative because it does not take into account other investments that will be made in the energy market, such as the decommissioning of Kosova A power plant, investments in Kosova B power plant of nearly 300 million EUR and other investments in mining that will necessarily reflect on tariffs. Therefore, a possible reduction of the target price of 80 € MWh will not result in lower tariffs than the ones presented in this analysis.

According to Hyseni, the most vulnerable groups as a result of increases in electrical energy prices are families that live below the poverty line. According to the 2015 report on consumer poverty in Kosovo, there are 50,000 families which receive no state assistance whatsoever. If based on the data submitted by the ERO about amount charged by KEDS on the households, current average electricity price and the number of active consumers, it turns out that the monthly electricity bill for these citizens will be over 18% (40 EUR) of the monthly income of the whole family. From large foreign investors in Kosovo, being industrial consumers at the same time, Ferronikeli and Sharrcem largely depend on the use of electricity. Specifically speaking, together they consume over 12% of domestically produced energy and are directly supplied from the transmission network. The price at which these two companies have been supplied in years has not exceeded the value of 50 EUR per MWh, which is lower than that of the retail sale of electricity to consumers and small businesses. While, in case of construction of the "Kosova e Re" power plant, only the charge of 60 EUR per MWh, will be higher than the entire supply price for Sharrcem and Ferronikel currently. Under these conditions, it will be almost impossible to continue with the operation of two industrial customers Ferronikeli and Sharrcem. In general, based on the findings of the GAP Institute, the new power plant will extremely overburden the household budget; will increase operating costs of the businesses and will have a negative impact on the Kosovos budget.

At the end, Demi stressed out that given that the Assembly of Kosovo has invited for an interpellation on the "Kosova e Re" contract, session scheduled to be held on April 16th, 2018, one of the recommendations that should come out of this session is to request from the ERO for an official report on the impact of "Kosova" on energy tariffs.