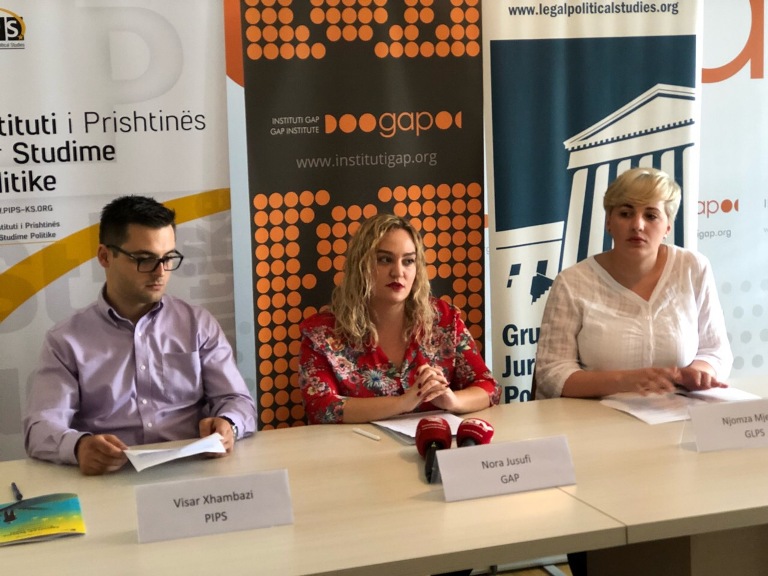 During this conference the findings from the monitoring of the remaining obligations which were foreseen to be finalized in 2018, according to the decision of the thirteenth meeting of the Kosovo Government that was held in November last year, were presented. The objectives of the European Reform Agenda (ERA) are divided into three main pillars: i) good governance and rule of law; ii) competitiveness and investment climate; and iii) employment and education.

Njomza Mjeku, Project Officer at GLPS, stressed that in the area of ​​good governance and rule of law, 11 measures and 36 relevant actions have been identified, out of which 23 actions are fully implemented, four actions are partially implemented, three actions remain unfulfilled and six actions are scheduled to be completed in the second half of this year. Mjeku added that some of the actions that have stagnated and are still being processed within this field are: the adoption of legislation on the suspension or removal of public officials, the adoption of the Law on Disciplinary Liability of Judges and Prosecutors, the adoption of a legal package for public administration reform and a legal package for electoral reform among others.

Nora Jusufi, Researcher at GAP Institute, stated that in the field of competitiveness and investment climate there are a total of 12 measures and 44 actions out of which 17 actions are fully implemented, five actions are partially implemented, six actions remain unfulfilled and 16 actions are scheduled to be finalized in the second half of this year. Jusufi added that some of the objectives which have some progress but have not been met entirely in the field are the restructuring of KIESA, the adoption of the Law on Energy Efficiency and the creation of a corresponding fund, and the implementation of measures within the framework of the Connectivity Agenda due to non-implementation of the agreements by all signatories.

Visar Xhambazi, Researcher at PIPS, said that in the field of employment and education from six measures and 27 relevant actions in this field, six actions were fully implemented, 10 actions were partially implemented, six actions remained unfulfilled and five actions were foreseen to be met until the end of this year. Xhambazi pointed out that in the field of employment and education some of the shortcomings in this area relate to the adoption of labor regulations for the Employment Agency, the allocation of the appropriate budget for the implementation of the Strategic Education Plan, the Curriculum, Standards and Assessment Agency, and the design of core curricula for Vocational Education and Training.

In total, the ERA implementation plan for 2018 includes 29 general measures, which are broken down into 107 concrete actions, of which only 42.99% have been fully implemented for this period, 17.76% partially fulfilled, and 14.02% are met at all, while 25.23% are expected to be finalized during July-December 2018.

GAP Institute, the Group for Legal and Political Studies, and the Prishtina Institute for Political Studies consider that not much work has been done. In order for Kosovo to move forward on the road to EU integration, greater attention and commitment is needed in meeting each objective that comes from the ERA. For this reason, we call on the government to devote maximum resources to the implementation of the obligations they undertake.