Millions of Euros of the Kosovo Budget continue to be spent on official lunches and dinners. Although in some cases, these expenses are necessary, there is a need to exercise more institutional scrutiny in an effort to reduce unnecessary expenses.

To avoid any damages to the country’s budget, to preserve economic interests, and to enable a more efficient management of financial means, expense limits must be set for representation according to the following Administrative Instruction. Pursuant to Article 5 of the Instruction, representation expenses for the Prime Minister and deputy prime ministers are unlimited. Meanwhile, such expenses for the ministers are limited to up to 500 Euros a month, deputy ministers have up to 200 Euros a month, political advisors up to 100 euros a month, chiefs of staff of ministers have up to 50 Euros a month, and so forth. Amongst others, these expenses are not allowed for private purposes, but only for official ones.

According to Ministry of Finance 2017 Annual Financial Report, during 2017, a total of 2.9 million Euros were spent from Kosovo Budget for official lunches in and out of the country. Compared to the year before, such spending has increased for 3%, or 79 thousand Euros. 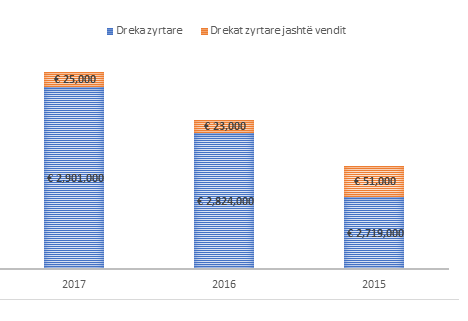 Pursuant to the Law on Access to Public Documents, GAP Institute requested detailed representation expenses for the year of 2017, from the Office of Prime Minister (OPM) and Ministries.

Although such records are legally required to be published, this request was rejected by: Ministry of Foreign Affairs, Ministry of Kosovo Security Force, Ministry of Trade and Industry, Ministry of Public Administration, Ministry of Agriculture, Forestry and Rural Development, and the Ministry of Health. While the Ministry of Justice publishes its expenditures on weekly basis on its official website, including representation costs, such data are not easily accessible and legible for the purposes of our research. Therefore, the Law on Access to Public Documents continues to be defied.

The number of responses received is the same as the last year, but this year, we have received replies from the OPM and 12 ministries. However, the OPM failed to provide records on personal spending of both prime ministers, Isa Mustafa and Ramush Haradinaj, and declined to provide any details on any member of the Cabinet. The Minister of Internal Affairs offered generic data on expenses, without any detailed specification of individual expense. The same was done by the Ministry of Labor and Social Welfare. Based on the records shared by the Office of Prime Minister and 12 ministries, in 2017, a total of 334,618 euros were spent for representation. 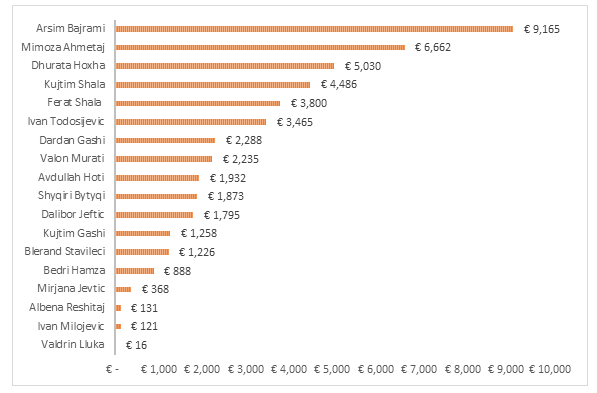 Deputy ministers may spend up to 200 euros a month, or a total of 2,400 euros throughout the year. Consequently, Deputy Minister Anila Statovci, exceeded expenses, with a total of 6,907 euros, being the only deputy minister going beyond the expenditure limit. 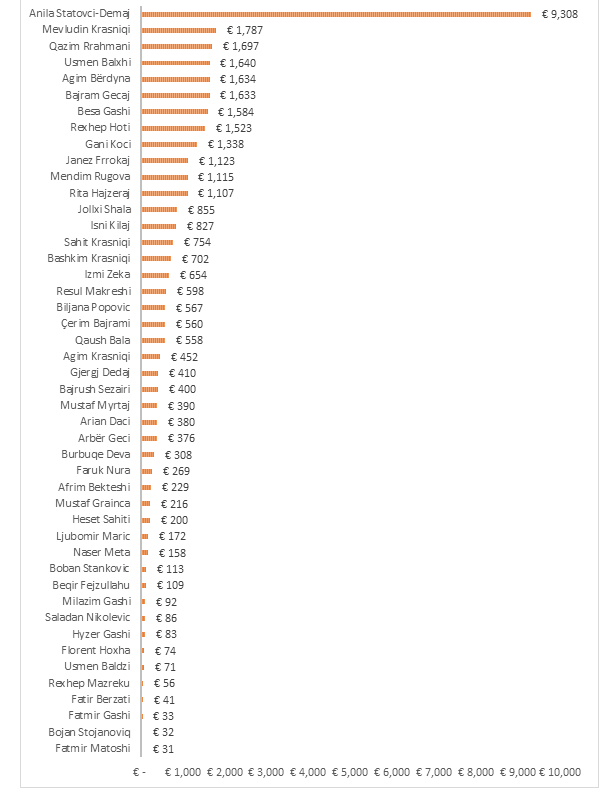 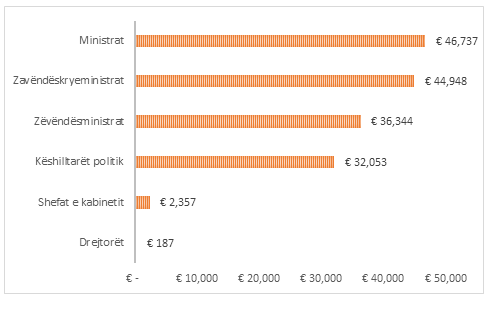 Exceeding of expenditure level has not been found in categories of political advisors, chiefs of staff, or directors.

This link: https://bit.ly/2Nx6PGe, provides a visual overview on representation expenses of the Office of Prime Minister and 12 ministries in 2017, and people responsible for all expenses.