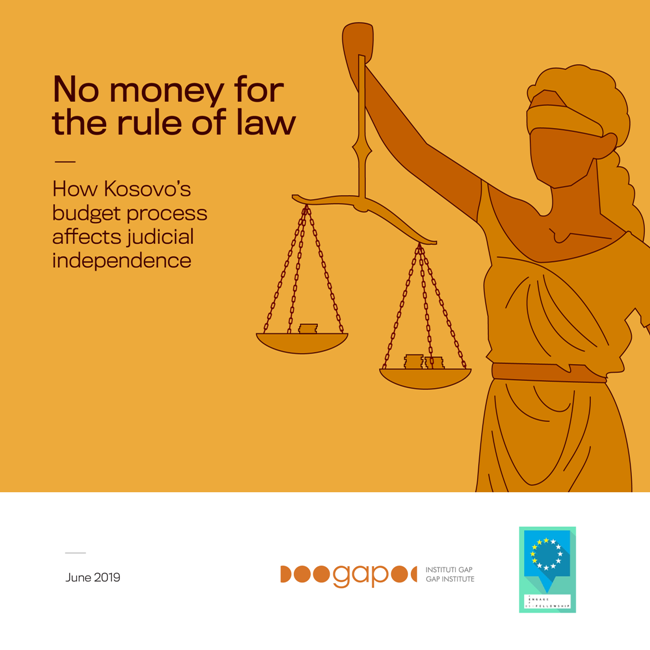 Today, GAP Institute launched their report “No money for the rule of law: How the budget process affects the judiciarys independence?” Analyzing the budgeting process for the Kosovo Judicial Council and Kosovo Prosecutorial Council, the study aims to highlight whether the government can interfere in their autonomies, through the budgeting process.

The report argues that the current budgeting process could threaten the independence and effectiveness of judicial and prosecutorial institutions. Some of the issues identified with the budget allocation process include the insufficient time and lack of professional resources of the Assembly of Kosovo to review budget requests in detail, and the lack of timely data and criteria for budget allocations. The lack of regular budget hearings with the Judicial Council and the Prosecutorial Council, and the lack of comparable data with other countries are some of the reasons that could lead to limited budget capacities of the KJC and KPC to effectively fulfill their missions. The report found no evidence that the ruling political parties showed deliberate intent to interfere with the independence of the judicial system, although neither the Ministry of Finance nor the Kosovo Assembly were able to provide justifications for rejecting KJCs and the KPCs budget requests. The budgeting process for these two institutions has also been analyzed against the Council of Europe recommendations.

The report provides a number of recommendations on how to improve the budgeting process for the judiciary. As recommended by the Council of Europe, the involvement of the KJC and KPC during budget allocations should be mandatory and provided by law. The Assembly of Kosovo should use benchmarks and provide transparent arguments to the public when it supports or rejects the KJC and KPC budget requests. The law on budget allocations should be submitted to the Assembly of Kosovo at least three months before the beginning of the fiscal year, so that the committees are given more time to evaluate budget requests.

This study was prepared as part of the ENGAGE II Scholarship Programme, together with the Center for European Policy Studies (CEPS) in Brussels.