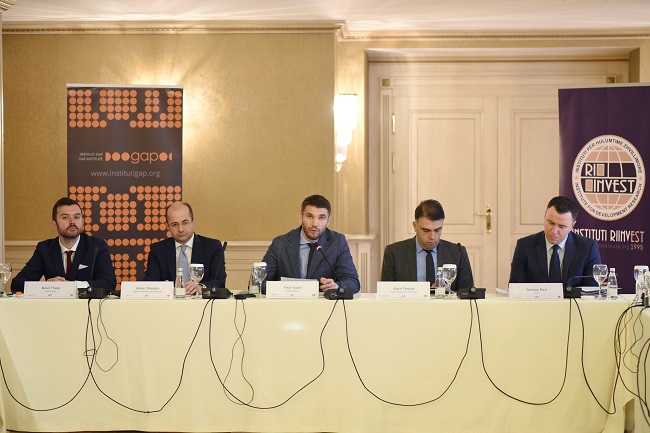 Today, GAP Institute, Riinvest and ACIT held a roundtable to discuss the findings of two studies carried out conducted in Albania and Kosovo, on the trade potential between the two countries, trade barriers, and implementation of bilateral agreements.

In his introduction to the discussion, Visar Vokrri from Riinvest Institute, informed the attendees regarding the publication of two studies, revealing the trade potential and barriers of commercial exchanges between Kosovo and Albania.  The two studies are part of the project “Albania - Kosovo, Deconstruction of the idea of unification - Citizens’ perceptions of cooperation between the two countries”, financially supported by the Kosovo Foundation for Open Society - KFOS and the Open Society Foundation for Albania - OSFA. Mr. Vokrri stated that beyond the cultural and historical ties between the two countries, Albania and Kosovo are important strategic trade partners to each other. Moreover, he underlined that despite the fact that we already have a significant number of bilateral agreements regulating various trade issues, when it comes to trade exchanges between the two countries a number of technical obstacles or other non-tariff barriers remain unresolved.

Berat Thaqi, from GAP Institute, presented the findings of the report on the problems faced by exports from Kosovo to Albania.  To measure the implementation of agreements, GAP and Riinvest Institutes have identified about 53 concrete objectives/obligations arising from the Kosovo-Albania trade agreements. Based on the findings, 49% of these objectives have been fully achieved, 36% have been partially achieved, 9% have not been achieved at all, and no answer was obtained for three objectives. Objectives of agreements which have not been fully fulfilled include: failure to hold regular technical level meetings as a result of the high dependence on the political level; elimination of arbitrary prices identified as obstacles to exports from Kosovo, such as chocolate or potatoes; double procedures during product transit, etc. Finally, he highlighted the recommendations of the report, including: to utilize the trade exchange potential; both countries to work on strengthening the rule of law, enforcement of contracts and reduction of corruption; to create joint programs promoting trade exchanges between Kosovo and Albania, either through financial facilitation or technical support of businesses; to enter into agreements in order to harmonize legislation on excise duties or other domestic taxes that have become an obstacle to fair competition between the two countries; and to create support programs to incentivize industries with a high trade exchange potential.

Gentian Elezi, from ACIT, presented the findings of the report on the problems faced by exports from Albania to Kosovo. He stated that despite an increase in trade flows and economic cooperation between the two countries in the last ten years, the two economies present structural weaknesses which hamper the utilization of the trade exchange potential. He highlighted the recommendations of the report, which include the establishment of a high bilateral structure (directorate) with the task of monitoring and accelerating the implementation of agreements; establishment of a Joint Investments Fund as an instrument to support strategic projects that improve competitiveness and facilitate economic integration; the 10-year strategic document for harmonizing economic development policies, and drafting an action plan on the implementation of the strategy.

Arben Shkodra from the Union of Albanian Producers stressed that Kosovo and Albania have about 70 signed agreements, many of which are not being implemented. Agreements exist; however, secondary legislation is required in order to ease the barriers between the two countries. He highlighted the potentials of both countries, and that their joint focus should importing and exporting with abroad, and in exploring the possibilities of accessing the European market.

Astrit Panxha from the Kosovo Producers Club stated that there is potential for an increased trade between the two countries. He mentioned the Kosovo beverage sector as a good export potential to Albania, although this sector also faces barriers. Mr. Panxha stated that opening a customs point does not imply there will be automatic trade cooperation. There should, however, be concrete and continuous national incentives to achieve a higher trade. Kosovo has been shown to be more open to investment from Albania, such as the case with the insurance sector, finance, retail, etc.  In terms of the agreements between the two countries, they failed to yield results.  He emphasized the importance of removing the human factor from processes, such as with phytosanitary and customs certificates, as they arbitrarily impose tariff and non-tariff barriers.  The number of controls should be reduced, and they should be applied only in cases of suspicions.