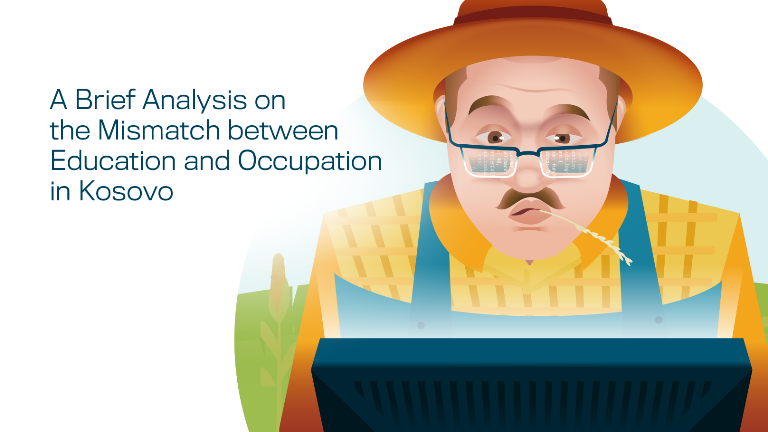 There is a gap between job market demands and the labor force trained from Kosovo educational institutions. As a result, the number of individuals facing a mismatch between education and occupation is very high. Factors that may have an impact on horizontal mismatch include gender, age, marital status, area of residence, ethnicity, level of education, as well as their programe of education and training.

In this report GAP Institute shows that 54% of respondents face a mismatch between education and profession, of which 61% are men and 39% women. The three university programs from which graduates have the most mismatch are general programs (88%), exact sciences (76%), and agriculture and veterinary medicine (78%). Whereas, the programs with the least mismatch are education (13%) and health and welfare (17%).

On the other hand, the industries where workers have the most mismatch are agriculture, forestry and fishing (62%), construction (83%), wholesale and retail trade, vehicle and motorcycle repairs (77%), and other services (69%), while workers with the least mismatch are in education (9%).

Furthermore, this study aims to answer the question of what causes the aforementioned mismatch. It follows that gender is one of the main determinants, where if the individual is a woman, she will, on average, have less mismatch than a man. However, this does not apply to women who have pursued educational programs such as law and engineering, or work in industries such as agriculture, manufacturing, and trade, where the mismatch is greater.

Gender differences in certain educational and industrial fields may also be the result of stereotypes observed in other countries as well, where men, unlike women, are employed in the most productive industries of the economy, and that men and women graduate from educational programs historically dominated by them - men in engineering, and women in education and health.