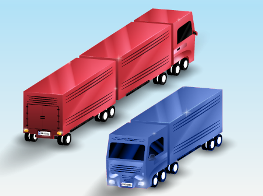 On the eve of the joint meeting between the Government of Kosovo and the Government of Albania, scheduled for October 2, 2020, where new agreements are expected to be signed, GAP Institute, Riinvest Institute and the Albanian Center for Competitiveness and International Trade (ACIT), request implementation of past trade agreements. At the beginning of 2020, these organizations have published two studies on trade agreements between the two countries, one from the perspective of Kosovo entitled "Kosovo-Albania trade potential" and the other from the perspective of Albania "Two countries one economy".

The recommendations from these two studies include precisely the implementation of the agreements, the elimination of barriers and the use of existing potentials. Studies recommend among other things to establish a stable bilateral structure, with political and technical representation, with a clear mandate and obligation to monitor and accelerate the implementation of agreements, elimination of barriers and following other steps towards economic integration;  To draft a strategy and action plan for trade and economic integration, incorporating the existing and new agreements, to maintain coherence and maximize impact;  To sign new agreements for the harmonization of tax and excise legislation; To eliminate the existing barriers for setting up and establishing businesses in both countries; To establish joint instruments (such as the Joint Investment Fund), with the aim of supporting common development policies, especially in the sectors which consolidate the value chain, as well as in categories that have a competitive potential in the region and beyond and to supplement the decision on the use of the Port of Durres by Kosovo Customs for export, rather than only import

Albania and Kosovo are important trading partners to each other. For Kosovo, Albania tops in exports and comes fifth in terms of imports. Albania is important for Kosovo also because more than a third of products traded in Kosovo transit through it. On the other hand, Kosovo is also an important partner for Albania, being the only country with which it has a trade surplus. Despite a growing trade exchange and efforts to deepen economic cooperation through numerous agreements, the potential to further increase trade exchanges for both countries remains untapped, and trade barriers are still hampering economic integration between them.