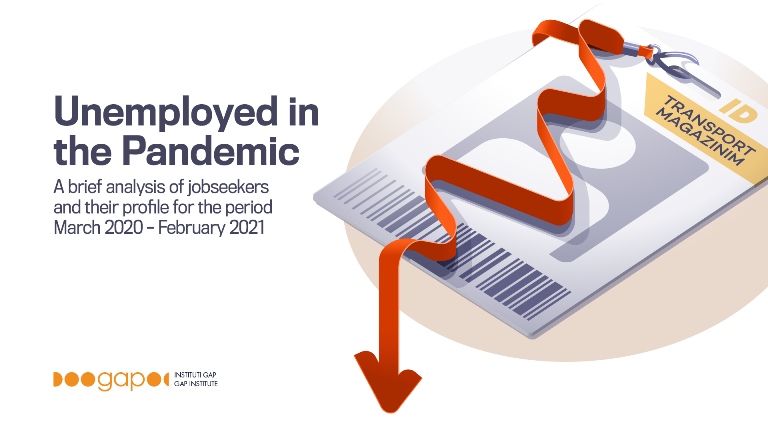 Today, GAP Institute published its report Unemployed in the Pandemic – A brief analysis of jobseeker figures and profile for the period march 2020 – february 2021. The report shows that economic hardships brought on by the COVID-19 pandemic have significantly affected the economy and especially the labor market in Kosovo. According to the Kosovo Agency of Statistics (KAS), the employment rate fell from 29.1% in the first quarter to 24.1% in the second quarter of 2020, while unemployment rose by 2.2 percentage points from the first quarter (25%) to the second quarter of 2020 (27.2%). According to the Tax Administration of Kosovo (TAK), the industries that suffered on average the largest drop in employee numbers between 2019-2020 were transportation and storage (-2,668 employees), public administration (-1,509 employees), trade and repair of motor vehicles (-1,406 employees).

Coincidentally, the number of active jobseekers rose, partly as a result of loss of jobs for a portion of the population as well as the Government emergency fiscal measures, in support of those who registered at employment centers as unemployed. According to the Employment Agency of Kosovo (APRK), from March 2020, the number of active jobseekers began to rise significantly, reaching its peak in September with more than 198 thousand jobseekers. Further, this research examined jobseekers in terms of various features, such as age, sex, and level of education, where most are in the 25-39 age group, with an almost equal distribution between men and women, while in terms of the level of education jobseekers are predominantly uneducated and with primary or secondary education.

Moreover, this study considers the challenges and needs of the Employment Agency, which has faced head-on the large number of jobseekers throughout 2020.  Hence, looking at improving the labor market in general, the GAP Institute recommends that the Employment Agency in Kosovo should receive capacity building to facilitate increased employment, especially for certain vulnerable groups of jobseekers. Moreover, it is suggested that the Agency should be able to consistently collect more detailed information on the status of registered jobseekers, and that it should provide more training or career guidance opportunities for jobseekers, especially in areas where the demand for employees is expected to pick-up.