Economy of Cars in Kosovo 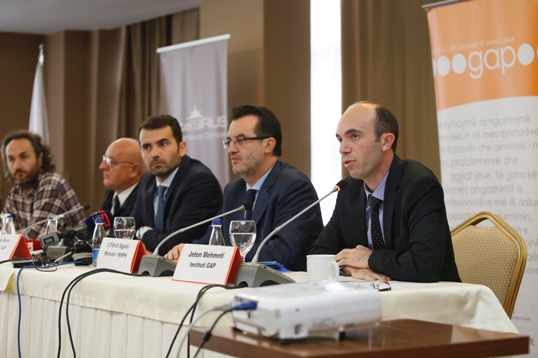 Are government policies on car import and registration impacting the increase in car accidents in traffic and harms to environment and health?

GAP Institute today has organized a conference where it has published a study titled “The economy of cars: an analysis of governmental policies for the import, registration and control of cars”

The study reveals the many omissions that happen during technical control of the vehicles, concluding that improper technical controls are affecting the increase of car accidents and environment pollution. Ardian Gojani presented on the impact of the age of vehicles in environment pollution. Gojani said that old vehicles pollute the environment more because they have passed through larger distances; hence, the engine and the equipment for gas emission control (catalyst convertors) have been consumed. According to him, the combustion of one kilogram of gasoline emits 2.9 kilogram CO2, whereas the same amount of diesel emits 3.1 kilogram CO2. Kosovo imports around 500 million liters of fuel annually and therefore, combustion of this fuel produces around 1.5 million ton CO2 per year. With the import of old cars this contribution towards pollution will increase even further, without any doubt.

Minister Ferid Agani said that the Ministry of Environment and Spatial Planning has concluded important legal and strategic documents which impose regulations even in the level of gas emissions from the vehicles. However, the application of legal rules for gas emissions from the vehicles is a responsibility of the Ministry of Infrastructure, which ought to monitor the centers of technical control. Even though the administrative instruction has been approved in 2011, this instruction has not been applied and MESP is in the process of issuing a new one.

On the other hand, Colonel Sheremet Ahmeti from Kosovo’s Police stated that fatal traffic accidents have increased in the last two months. According to Mr. Ahmeti the main contributors to the traffic accidents are people. According to him, Kosovo’s police cannot send vehicles for technical control because police officers are afraid that if the technical control results positive, then the payment should be made by the police officer himself/herself. Mr. Ahmeti requested higher cooperation with all public institutions but also the society in general to educate drivers and prevent accidents.

In the end GAP has recommended that the Government of Kosovo should replace the current policy on import of the cars which is based on age with that of importing the cars based on Euro standards, as soon as possible. Centers of technical control should measure the level of gas emissions as per the administrative instruction regarding the permitted values of polluters from gas emission.