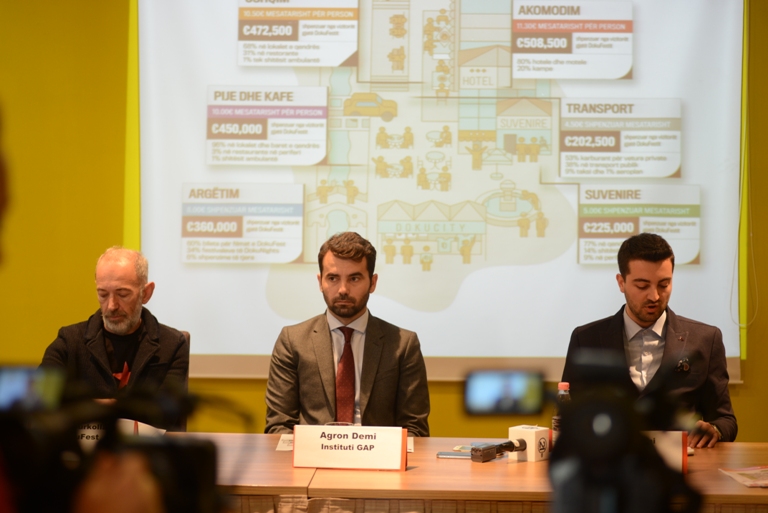 GAP Institute has published an analysis titled “The Economic Impact of DokuFest - forecasts for 2016-2018”.

Main beneficiaries of this festival were local businesses in Prizren: hotels, renters, restaurants, coffee-bars, street vendors, but also nation-wide businesses, such as airlines, banks, and telecommunication companies. This festival is also known for creating jobs, new investments, increasing the amount of income tax collected and stimulating the local economy through tourism.

During the 14th edition of DokuFest, i.e. the 2015 edition, there were more than 15,000 participants. The sample of 1,105 respondents represents 1/15 of the total number of visitors of DokuFest, i.e. every fourth person that purchased something in DokuFest shops. This sample is considered all-inclusive and statistically acceptable. The research was conducted with resident and non-resident visitors of Prizren. The research was carried over nine days. Out of those, 7,000 or 48% were first-time participants and their average age was 26. Since 2011, the number of participants has increased for over 50%, and based on preliminary trends, this number will continue to rise even more in the upcoming years. Consequently, the impact of DokuFest on GDP in 2015, with a propensity to import of 48%, amounted to the annual value of 2.4 million Euros. If consumption expenses are included, the annual impact is estimated to be over 4.7 million Euros.

Expense data show that a great part of consumption is concentrated on services which are mainly produced locally. However, when it comes to cash flow, based on the data from the Kosovo Agency of Statistics (KAS), 48% of products consumed are imported. In DokuFest 2011, the propensity to import was assumed 20% which had less of an impact on the decrease of the GDP than the 2015 value of 48%. Moreover, this year income increases have been registered at the Tax Administration of Kosovo (TAK) as well. Compared to July 2015, at the time DokuFest was held, tax income increased by 44%. Thus, economic impact is not limited only to Prizren because the increase of economic activity through the multiplier effect circulates the cash all over Kosovo.

Veton Nurkollari, from DokuFest, said that they were disappointed with the support that they have from municipality of Prizren. The budget dedicated for the organization of DokuFestis many times smaller than the income that the festival brings to the citizens of Prizren and the economy of Kosovo in general. Based on the facts of this analysis and data from Kosovo Tax Administration it appears that during August 2015, when DokuFest is held, tax revenues have raised to 44%.

Therefore, DokuFest as the biggest cultural event in Prizren and Kosovo-wide should be supported more, not only from the Municipality of Prizren, but also by the Ministry of Culture, and to be considered as an ambassador festival where Kosovo is represented in various countries around the world.

Agron Demi, Director of GAP Institute, recommended that DokuFest should have a separate budget line by the Ministry of Culture and the Municipality of Prizren, as Dokufest has been consistently proven that it is a leading cultural even in Kosovo.