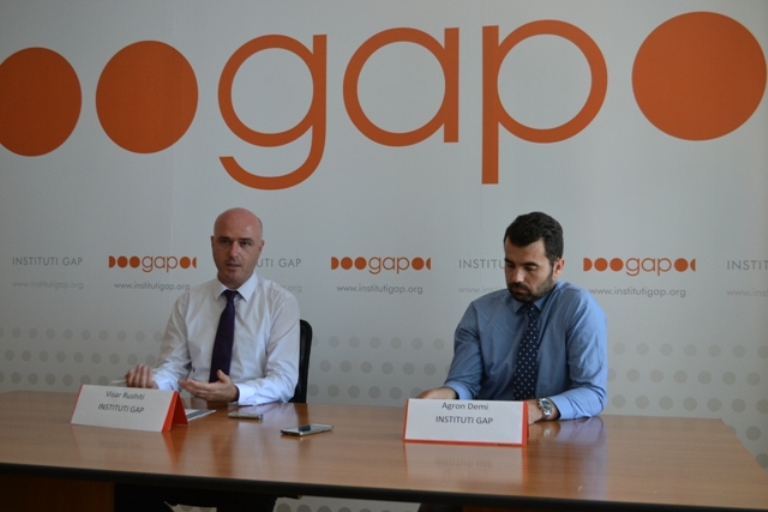 Kosovo has a large number of public administration institutions, and a large number of employees thereof. Despite promises to decrease the number of ministries, the current Government has increased the number of Ministers, from 20 to 21. In addition, ministries and the Office of the Prime Minister have established more than 70 central state administrative bodies (or executive agencies), and also the Assembly has established 34 independent institutions and agencies. In both central and local level, the public sector counts more than 91 thousand employees.

Visar Rushiti (GAP) presented the policy analysis. Among others, he stressed that there are three laws which are basic for the functioning and organization of the public administration in Kosovo: the Law on the Civil Service, the Law on Salaries of Civil Servants, and the Law on the State Administration. Based on the above-mentioned laws, from 2010 to July 2015, another 86 bylaws (regulations and administrative instructions) have been issued. There are at least two problems related to the legal framework in this area: 1) supplementing and amending laws without having a well-established implementation of laws in practice and 2) collision between bylaws and laws.

Out of 19 ministries that the Government has, only six ministries have no executive agency within them. Agencies within the Office of the Prime Minister create confusion regarding their institutional position as well as the responsibility that they have within the institution.

In February 2015, the Government of Kosovo has adopted the Civil Service Job Catalogue. However, so far it is not clear how this Catalogue will be harmonized with the Government regulations on internal organization and systematization of jobs, adopted for each ministry. Over one thousand public servants retire annually. Within the five-year period (2015-2019), 7.179 public servants shall retire.

In order to address the size of the public administration structurally and numerically, GAP Institute recommends the Government to apply a policy of reducing the number of public and civil servants, which would be implemented through their regular retirement after reaching the age of 65 years, in accordance with the Law on Civil Service and the Law on Labor.

Such a policy initially should be implemented for a five-year period (2015-2019), the effects of which would be seen following an analysis thereof. The Government should proceed for approval the Law on the Government, whereby it would specify the need and the procedure on establishment of ministries through supplementing and amending the Law in the Assembly. The Government should establish a committee to review the functionality and the need of having over 70 central state administration bodies.

Also, the Assembly should initiate similar procedures to review the functionality and rationale of existence of 34 independent agencies.